As a worker in the field offices of a large distributed workforce assembled by venture capitalists, equity is usually a part of my compensation package. Of late, equity has been getting a bit of a bum rap, and rightfully so. I want to explore why, and what a truly equitable, sustainable corporate structure might look like for founders, investors, and employees alike.

So, equity. For a low ranking technologist at a young startup, the smart wisdom these days is to opt for more cash instead of more equity. It’s not hard to see why: equity requires a liquidity event to be converted into cash, and is worthless otherwise. The two main types of liquidity events are IPOs and acquisitions, both very unlikely for the majority of startups. And even acquisitions, the more common of the two, are seen as failures and are not something to be aimed for at the outset.

This calculus makes sense when you consider that investors expect 10x returns. It also makes sense when a successful liquidity event generally makes the founders and investors very, very, very rich. A few employees might do well for themselves, but it’s still crumbs compared to the amount earned by the people holding the majority of the equity. So, after working very, very hard for a long time, an employee has a tiny chance of being rewarded a few crumbs from the bulk of the value they created over the years.

Of course, employees don’t compare themselves to founders and investors. There is a concept of risk: since founders and investors took large amounts of risk with their money, careers, and time, they are justified in getting large returns. Since an employee took no risks, the employee is not entitled to any such return.

These three concepts - growth, risk, and markets - are the kernels at the heart of modern capitalism.

So, what if there was a corporation that did not aim for growth? What if, instead of trying to increase profits year over year, a company aimed for a certain level of profits, and then paid it all out to employees, founders, and investors in form of dividends? This is not a new idea - cooperatives have been around for a while, and some have done very well.

This kind of company is an excellent deal for employees: instead of a lottery ticket, they get bonuses corresponding directly to the profits made each year. This is a very tangible incentive for employees to do great work and create lots of value, as opposed to the supposed “ownership” that entails working very hard for equity that may or may not pay off in the future.

Is it a good deal for founders? I think so. There is a long tail of the types of companies that can support sustained profits without needing to grow. Instead of a tiny shot at getting extremely rich, you get a much bigger shot at being really rich, while providing very well for your employees the entire time. That sounds pretty fulfilling. Starting up would still be risky, but I think there is something to be said for diminishing marginal returns: there isn’t much tangible difference between being really, really rich and being really, really, really rich.

And how about investors? This is where it gets tricky. The whole point of venture capital as an asset class is to be a small, very risky part of a diverse portfolio for LPs. This is why VC firms have such small horizons, and why there is such an urgency about huge returns. VCs would not be incentivized to invest in a profit-sharing company with a large chance of providing consistent returns over a long time. They are supposed to burn through money on the off chance they strike gold, because the rest of an LP portfolio is composed of much safer investments.

But VCs can provide real value to startups, regardless of the underlying incentive structures. In an ideal world, there would be value add VCs that are okay with less risk, less reward, and a much greater distribution of wealth to everyone in the system. Incidentally, angels are capable of filling this role right now, since they have no LPs to answer to and have more flexibility with respect to risk, growth, and the structure of returns.

Could this work in practice? I’m not sure, and I lean towards doubt. The whole premise, “achieving consistent profits without re-investing into growth”, is not compatible with theoretical economics in the long run, because profit does not occur in the presence of perfect competition in equilibrium. Basically, if a company achieves profit and chooses not to grow, another company will compete with it, grow, and achieve hegemony. And there are many positives to this process: it results in better products and services produced more efficiently.

So, growth of a company, and transitively, growth of the economy as a whole, is structurally necessary for capitalism to succeed. We can see this by the way anyone ever talks about the economy: “failure to grow” is a failing economy and a failing company, and “economic growth” means healthy economies and healthy companies. There is no middle ground.

I don’t think this is sustainable. Companies can’t grow forever, and neither can economies. Geoff West has some great points about this. You might have seen the Walmart growth curve, which is mirrored by many successful companies (and civilizations) that later die: 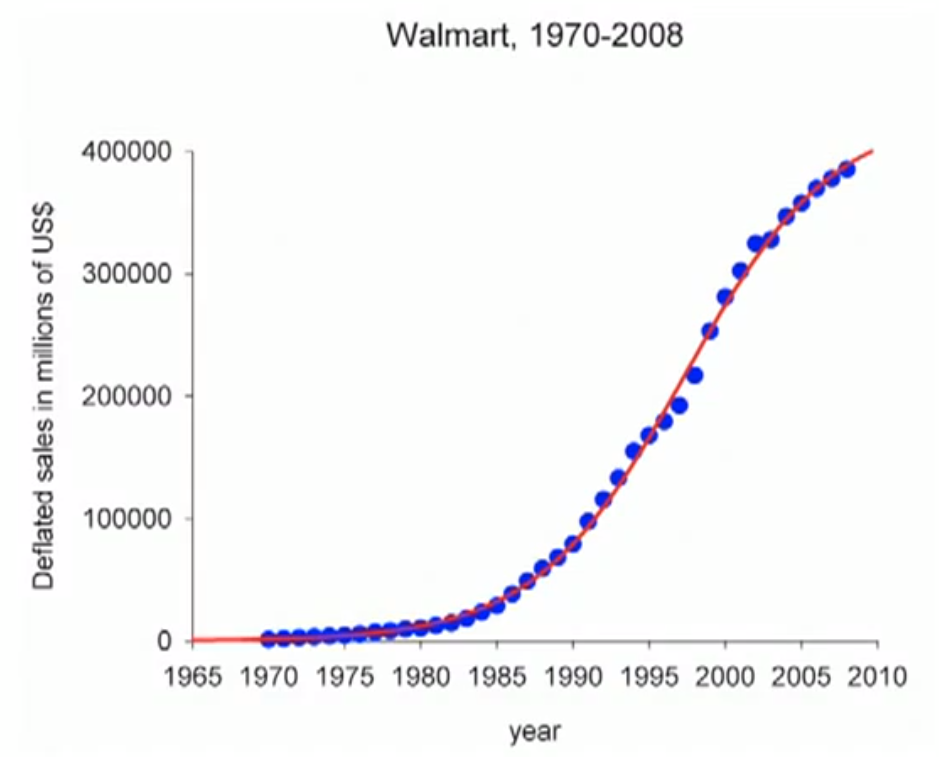 In theory, if a company chooses not to grow, then it should be able to live sustainably forever, without buckling under its own weight. But this will only work in an economy where no company aspires to monstrous growth, and that strikes me as downright intractable.

The irony is that, over the long run, and over the entire economy, this system should result in much more value created in aggregate. No more booms, no more busts: just predictable, bountiful wealth for the whole society.

Thanks to Gary Chou, Mike Swift, Samarth Bhaskar, and many others for entertaining versions of this idea in conversation.